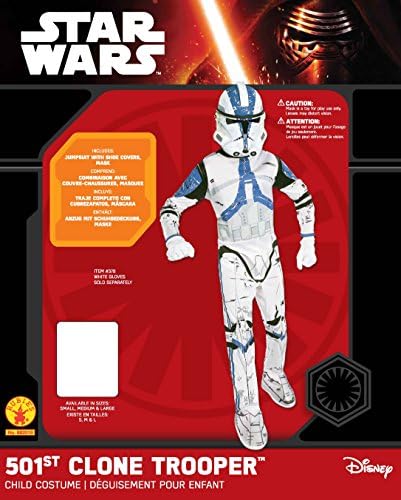 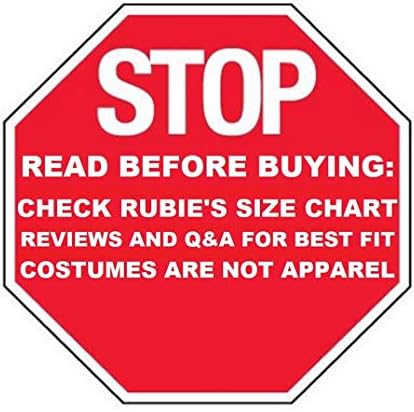 Now they can enlist along with the other Republic soldiers while wearing this costume jumpsuit officially licensed Classic Star Wars Clone Trooper Children’s costume. No one will know that they aren’t a genetically created clone. Features a long sleeve white jumpsuit with printed black, grey and blue armor pattern; attached printed shoe covers and injection molded half face mask with elastic strap closure. Pair with other officially licensed Trooper costumes to create your own Clone Trooper army of fun. Clone troopers were genetically created on planet Kamino from the template of the famed bounty hunter Jango Fett; they created a highly-efficient military Republic force. Includes printed jumpsuit and face mask; gloves and shoes sold separately. Rubie’s offers officially licensed Star Wars costumes from all of your favorite films and series in all of your favorite characters. Family-owned, family-focused and based in New York since 1950. As the world’s largest designer and manufacturer of costumes Rubie’s brings fun and fantasy to dress-up. Offering everything from full mascot suits to masks and wigs, from deluxe licensed costumes to simple starter pieces, from costume shoes to character make-up, and so much more. Rubie’s promotes safety in dress-up, so you can relax and have a great time while looking the part. Look to Rubie’s for every costume occasion and season: Halloween, Christmas, Mardi Gras, Easter, and all occasions in-between.

100% Polyester
Budget-friendly printed Clone Trooper costume jumpsuit and injection molded mask
IMPORTANT: Costumes are sized differently than clothing, make sure to consult the Rubie’s Child size chart before making selection
OFFICIALLY LICENSED Star Wars costume, items shipped and sold by Amazon are guaranteed to be authentic
Combine with child and adult Clone Wars costumes including Sith Lords, Captain Rex, and more
With costumes and accessories from all the Star Wars movies and shows, Rubie’s lets you create a fun group or family costume