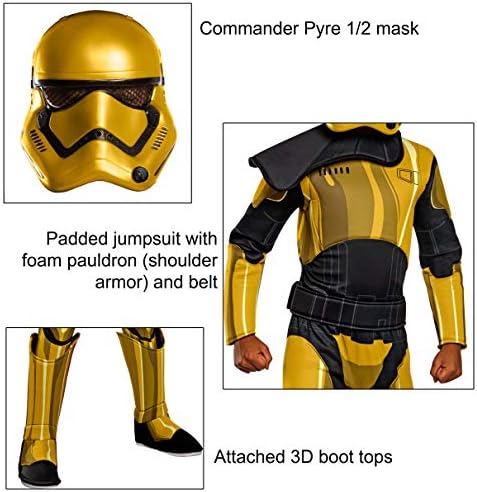 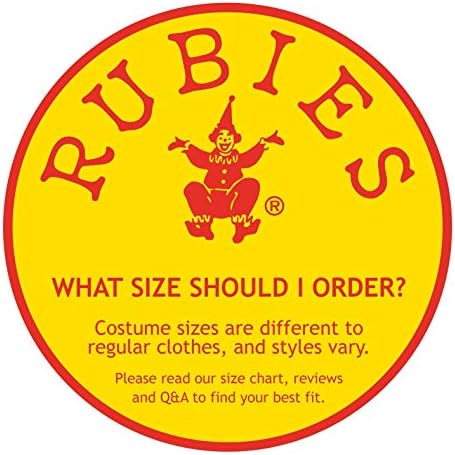 Pyre’s Prerogative We like how Commander Pyre thinks. He didn’t spend all of that time training, proving himself to be a cut above the rest of the Stormtroopers just to be stuck wearing the same, bland white outfit as everyone else! Some soldiers just shine and their outfit should shine along with them. They need some bling. You know… something that you need a pair of sunglasses to even look at! Commander Pyre gets it. He rocks a full-on gold Stormtrooper suit to make him stand out in a crowd. It makes sure that other Stormtroopers know that he’s the real deal. It also makes any Resistance member think twice before crossing him. And now, your child can stand out in the crowd by wearing this Star Wars Commander Pyre Costume! Product Details This Commander Pyre Costume is a deluxe kid’s costume based on the character from the animated series, Star Wars: Resistance. It comes with a full-body, black and gold jumpsuit that recreate the look of Pyre’s armor from the series. It even has printed details all over the exterior to help your child look like one stylin’ soldier. The legs come with attached boot covers, so your child can wear any pair of shoes they want with the jumpsuit and not lose an ounce of bling. The shoulder pad is reminiscent of the Sandtroopers from the original Star Wars trilogy, giving your child a look that’s ready for action! Finally, the mask is made out of molded plastic and features the classic Stormtrooper style with a gleaming gold color! Bring Some Sunglasses! Once your child slips into this Star Wars Commander Pyre Costume, they’ll be ready to command their own unit of First Order Stormtroopers! Just remember to pack a pair of sunglasses, because you might need them when you catch a glimpse of your child shining in full golden fashion! – Jumpsuit W/ Boot Tops – Pauldron – Mask – Belt

Officially licensed Star Wars resistance costume, a trademark of Disney and Lucasfilm; look for logo on packaging and labels to help insure you’ve received authentic safety-tested item
Child’s deluxe Commander pyre foam padded costume jumpsuit with attached pauldron and shoe-covers, belt, and mask
Important: Costumes are sized differently than apparel, use the Rubie’s Child Size Chart image, do not choose based on child’s age or clothing size
Combine with child, adult, and pet Star Wars costumes, as well as décor items, including classic favorites like Han solo, Chewbacca, Princess Leia, Yoda, and Darth Vader
From movie Premieres to fan conventions And fun runs to Halloween, whatever the reason, or the season, Rubie’s, the world’s largest designer and manufacturer of costumes and accessories, is pleased to offer you and your family The latest and most innovative concepts in Masquerade