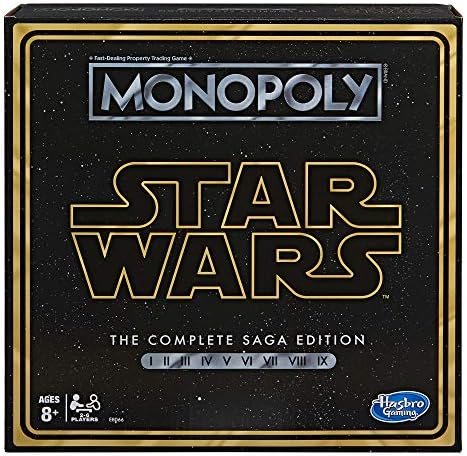 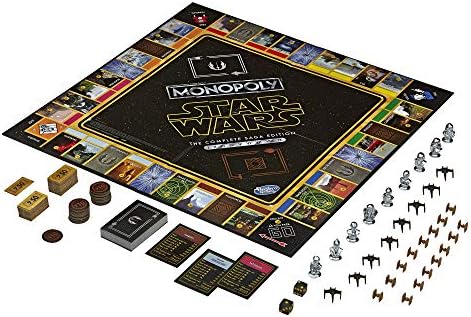 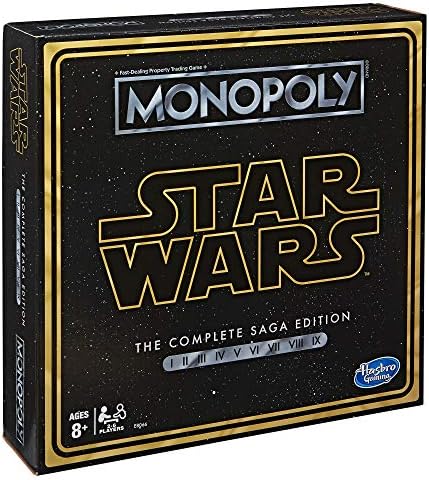 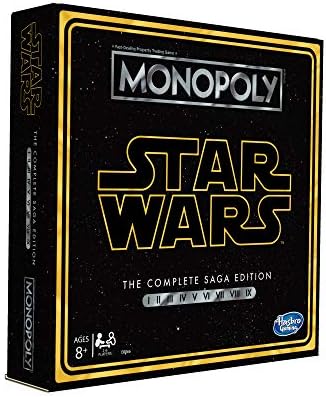 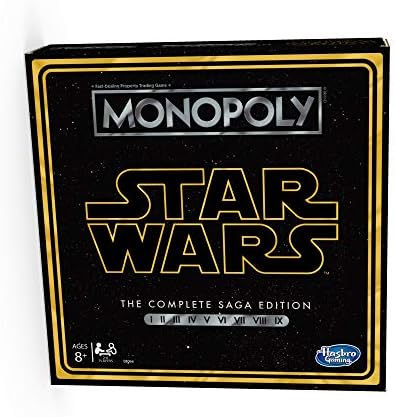 The Monopoly: Star Wars complete saga edition board game is a galactic celebration of all 3 Star Wars trilogies combined into one game! With game play inspired by the Star Wars universe and iconic Star Wars artwork — this game is a must for Star Wars fans. Properties include planets and droids, and instead of houses and hotels, this edition features tie fighters and X-wings. The last player left with credits when all other players go bankrupt, is the winner.

star Wars products are produced by Hasbro under license from Lucasfilm Ltd. Hasbro and all related terms are trademarks of Hasbro.
the Hasbro, Hasbro gaming, Parker brothers, and Monopoly names and logos, The distinctive design of the game board, The four corner Squares, the Mr. Monopoly name and character, As well as each of the distinctive elements of the board and playing pieces are trademarks of Hasbro for its property trading game and game equipment.

Star Wars trilogies: Star Wars fans can celebrate all of the Skywalker movies! This Star Wars edition of the Monopoly game lets players relive all 9 episodes from a galaxy far, far away
Exciting game for Star Wars fans: the Star Wars complete saga edition board game features dynamic and colorful artwork inspired by all 3 trilogies
Iconic Star Wars characters: the game includes 9 tokens; each one is a character that relates to one of the 9 star Wars trilogy movies
Star Wars themes: The properties in this Star Wars themed board game are planets and Droids. Tie fighters and X-wings replace houses and hotels. Landing on a light speed space lets players fly ahead
Star Wars themed cards: If a player lands on a Jedi training or holocron space, They have to pick the matching card and do whatever action It says