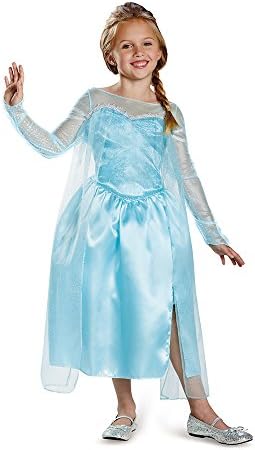 Frozen is a 2013 American 3D computer-animated musical fantasy-comedy film produced by Walt Disney Animation Studios and released by Walt Disney Pictures. The film tells the story of a fearless princess who sets off on an epic journey alongside a rugged, thrill-seeking mountain man, his loyal pet reindeer and a hapless snowman to find her estranged sister, whose icy powers have inadvertently trapped the kingdom in eternal winter. This beautiful satin dress has white knit mesh sleeves decorated with glitter swirls. The satin dress has organza overlay with glittery snowflakes, swirls & icicles.

100% Polyester
Imported
Quality materials used to make Disguise products
Fun, Colorful, Inventive designs to put you in the world of role play
Whether it’s Halloween, birthday parties, or even a fun filled night, disguise is good for everything!
Satin dress with glitter sleeves
Organza overlay with glitter detailing