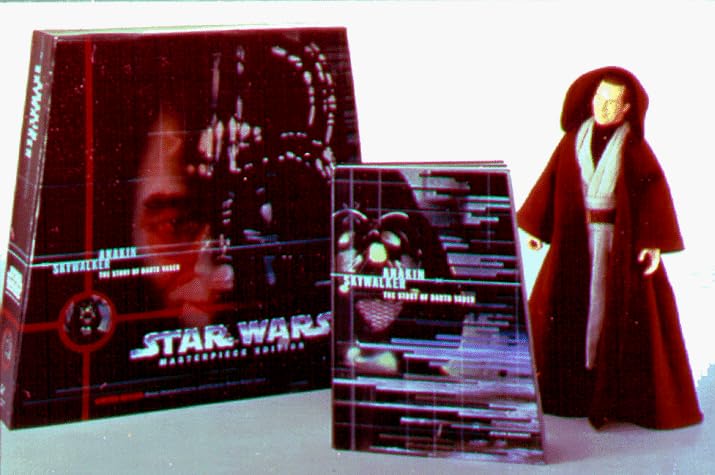 “The Force is strong in this one.” Anakin Skywalker, otherwise known as Darth Vader, is arguably the central character in George Lucas’s Star Wars story arc. His rise to Jedi power, descent into the temptations of the dark side of the Force, and ultimate redemption by his son Luke make for a fantastic modern myth, science fiction style. This book and action figure set is a must-have for serious collectors–it’s big and beautifully packaged in a pyramidal box. The 12″ Anakin Skywalker action figure represents him as he appeared at the end of Return of the Jedi, when his spirit form stood alongside fellow departed Jedi masters Obi Wan Kenobi and Yoda. The illustrated book is a delightful tour of the part of Darth Vader’s story that appeared in A New Hope, The Empire Strikes Back, and Return of the Jedi. (The information about young Anakin is gleaned from Lucas’s early story concepts rather than the new movies.) An extensive catalog of Vader collectibles completes the package.

THIS IS A GREAT ITEM FOR ALL STAR WARS COLLECTORS